Creeper began the year with big expectations behind them. Touted as the “one to watch”, the pressure was on to deliver – and with their first full length “Eternity, In Your Arms”, they did just that!

Fast forward 12 months and Creeper have toured Europe with All Time Low, completed a full run on the infamous Warped Tour and have now embarked on their final run of the year, headlining in their own right.

The tour has been promoted as “The Theatre of Fear”, raising the suggestion that the band are bringing more than just a straightforward set to their audience.  On Monday night in Birmingham, we grabbed a beer and stood back to take it all in….

Kicking off the night was the Watford-based Nervus.  Whilst the crowd was still trickling into the (currently fucking freezing) Institute, Nervus delivered an enjoyable set of indie/punk tracks – reminding us a little of Motion City Soundtrack at times.  Soon after came Microwave; bringing a far more emo tone to proceedings. As their set progressed, the growing crowd began to show increasing interest and by the time lead singer Nathan Hardy screamed the final lines of the set, all eyes were on the stage.

Cant Swim spent 2016 touring with household names such as Four Year Strong, Hit The Lights, Aaron West & The Roaring Twenties, Moose Blood and Boston Manor.  With their first full length,  the excellent “Fail You Again”, released earlier this year – this was the support we were most looking forward to seeing.  With 3 guitars and 4-man gang vocals, the sheer power of Cant Swim stood them head and shoulders above the previous artists of the evening.  From the onset, pockets of the crowd were singing along; we saw the first real “pits” of the evening with the occasional crowd surfer.  Highlights were “Stranger” & “Your Clothes”, fully recommend you check these guys out now – bigger things are inevitable. 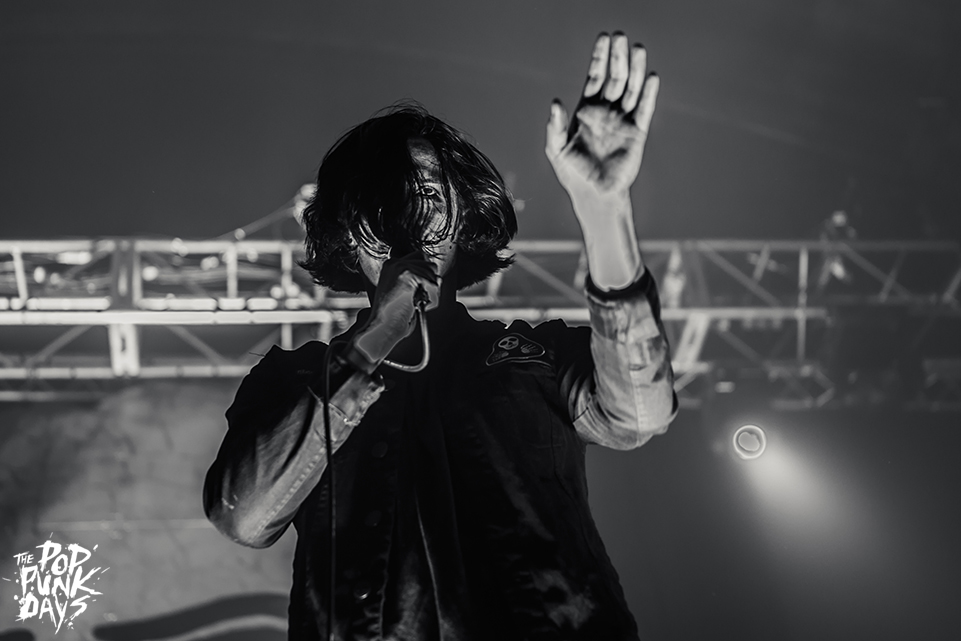 In the build-up to “Eternity, In Your Arms”, Creeper embarked on a promotional campaign which saw their social media accounts overtaken with details of a missing person – James Scythe.  Against the backdrop of Southampton’s World’s Fair 1967, the infamous James Scythe character took to the stage, embarking on a monologue to further push this intriguing concept.  The lights dropped and so started the introduction to “Black Rain” as the band took to the stage.  The mood in the room was euphoric as Creeper mercilessly pounded through their album. “Suzanne” & “Poison Pens” back to back ensured the room exploded into a frenzy and the sing along to “Down Below” was deafening.

“The Theatre of Fear” & wider concept was an ambitious project; yet was executed to perfection.

Creeper are a band right on top of their game; Will Gould was every inch the charismatic frontman and musically, the band were tighter than I’ve ever seen them. Since first hearing Creeper, I’ve always been a huge fan of what Hannah brings to the group, so it was great to see “Crickets” make the set. Taking centre stage, Hannah sang the emotional number with such passion, it was impossible to not feel moved. Creeper continued to rip through “Hiding With Boys”, “Darling” and “Astral Projection”, amongst others, with the crowd singing every word.

After a powerful rendition of “I Choose To Live, Creeper left the stage – the encore however was inevitable. The bands 2 biggest hits to date “Black Mass” & “Misery” closed proceedings and cemented their status of one the most exciting bands the UK has to offer.