Earning respect with their unwavering defiance, timeless guitar-driven melodicism and a touch of the macabre, Alkaline Trio are set to make their landmark debut at Slam Dunk Festival this September. Led by Matt Skiba, who is more recently recognised as a part of Blink-182, Alkaline Trio tapped into a worldwide hunger for a deeper, darker uniting punk sound and became a treasured and adored part of contemporary rock culture, Spanning a 24-year history that includes 9 influential studio albums, the Chicago icons’ latest offering ‘E.P.’, released in March 2020, features three monstrous singles that capture the effervescious spirit of Alkaline Trio; a spirit sure to be set free at Slam Dunk Festival.

Dan Andriano – Alkaline Trio
“Even while we continue to stay home to do our part, we look forward to coming back to the UK for our first time in years! Slam Dunk will be amazing!”

Originally confirmed to play Slam Dunk Festival 2020 before an unmissable opportunity materialised for them stateside, Utah’s noisiest sons The Used are back on track to make their Slam Dunk Festival debut in September. Promising an emphatic display mixing up longstanding hits such as ‘The Taste of Ink’ and ‘I Caught Fire’ with latest offerings ‘Cathedral Bell’ and ‘Paradise Lost, a poem by John Milton’, The Used’s passionate performance will be a defining moment for diehard fans and the perfect antidote for currently forlorn festival lovers.

“We are very excited to announce that we’re back on the lineup for the rescheduled @slamdunkmusic dates in September!

The biggest independent rock festival in the UK, Slam Dunk Festival is an unparalleled exhibition of all things alternative. The new September edition, taking place on Saturday 5th September and Sunday 6th September, will see headliners Don Broco and Sum 41 appear alongside newly announced Alkaline Trio and The Used as well as Billy Talent, While She Sleeps, The Story So Far, We Are The In Crowd, The Wonder Years, Mayday Parade and Code Orange and many more movers and shakers. 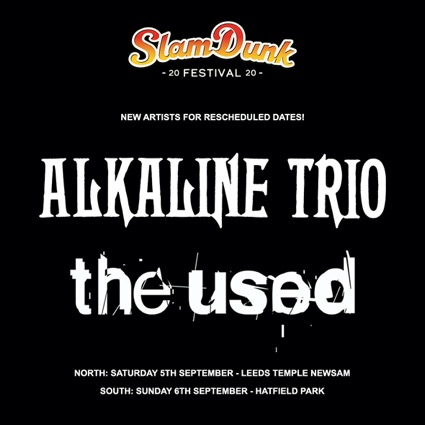