Yesterday Slam Dunk returned to the Midlands at the NEC in Birmingham. And it was a glorious day.

Andrew McMahon
What a way to start a festival, delivering an acoustic, all be it short set on the main stage it was hauntingly beautiful. Playing classics from Jacks Mannequin and Something Corporate and his new album Zombies on Broadway. It was a beautiful way to start Slam Dunk.

The Ataris
There were a few technical issues but this set was full of energy as they unleashed their nostalgia filled set.

Zebrahead
Returning yet again to the festival these guys are always fun. Tons of energy and laughs. Again there were issues and these were on a little late but it was still a great set.

Goldfinger
Punk-Ska favourites filled the Fireball stage, joined by Cyrus Bolooki from New Found Glory on drums. They played all the hits and their new track.

Reel Big Fish
I didn’t think it was possible for the crowd to get bigger but Reel Big Fish filled that stage front to back! And it was awesome to see a mix of all ages full on losing their crap and skanking like there was no tomorrow…

We The Kings
Their debut album We The Kings is 10 this year to celebrate they planned on playing it in full. We didn’t get that due to them running late, but what we did get was one hell of a fun set! Everyone at the Monster stage was moving and singing along, we even got 2 lots of Check Yes Juliet.

Madina Lake
I was already stoked for these guys as a 17 year old emo kid in college when From Them, Through Us, To You and I loved that album so when these were announced I was so hyped. But MY GOD the energy at that stage was un freaking real! Nathan Leone launching himself into the crowd. Silly amounts of people crowd surfing. No one was stood still the vibe was awesome. So glad to have these guys back. And my own personal highlight was having Nathan in my face for the majority of One Last Kiss… I fangirled, hard, and I’m not even sorry. If anyone got photos hit me up!

Enter Shikari
Another classic album turning 10 this year, Take To The Skies. I remember hearing the EP version of Sorry You’re Not age 17, and being blown away. These guys were a completely different kind of band with their style and lyrics. If you were not in the main stage last night, you missed out. It was like witnessing history in the making. And like at any shikari gig even if you’re at the back you’ll still have an awesome time. Its like a huge party. Just with one hell of a light show!

All in all it was a great first day at Slam Dunk few technical issues and bands running late. Even with the added police presence it didn’t dull the Slam Dunk vibes.

Leave us a comment of your favourite act of the day! 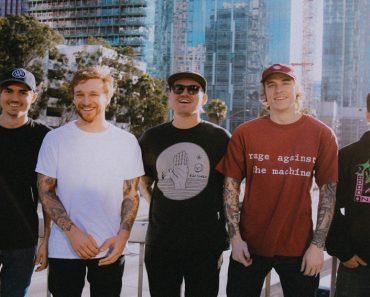